By PHILIP CMOR
For the Herald 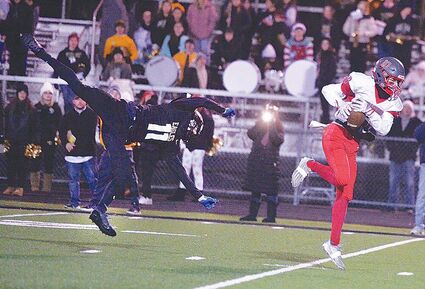 Central's Dalton Metzger pulls in a pass on Grove City's Nathan Greer to set up the Dragons first score of the night to help the Dragons advance to the PIAA 3A semifinals at Grove City High School Friday, Nov. 25. Central will face Belle Vernon tomorrow at Central Cambria.

Central is hoping the fourth time is the charm.

Entering this season, the Scarlet Dragons had ventured as far as the PIAA semifinals since Dave Baker became football coach, losing in that round to Aliquippa, Beaver Falls and, last year, to Central Valley.

"That was a tough loss for us," Dragon all-state quarterback Jeff Hoenstine said. "I think that made a lot of our players hungrier and more motivated to get back there and do more."

The only thing standing in the way of Central and its first trip to the state championship game now is Belle Vernon of the WPIAL and one of the best players in...