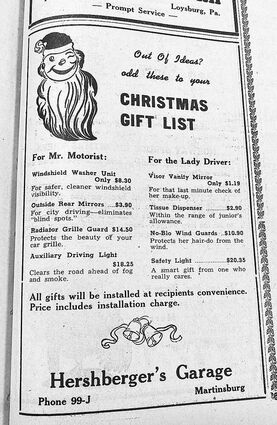 Shown is a Hershberger's Garage advertisement celebrating Christmas, found in the Herald archives.

Published in the Herald of December 21, 1972, in his Local History column. Burgess was a former editor of the Herald.

The people of the Cove have their own Christmas customs, many of which stem from the lives of Pennsylvania Dutch ancestors.

Mrs. Mamie Teeter, proprietor of Teeter's Hotel in Martinsburg, who was raised in the Pennsylvania Dutch country of Eastern Pennsylvania, likes to hear some of the old Dutch sayings and revive memories of happy Christmases when she was a little girl.

She recalls that money was not plentiful, that everyone worked hard and that there was no great outlay...