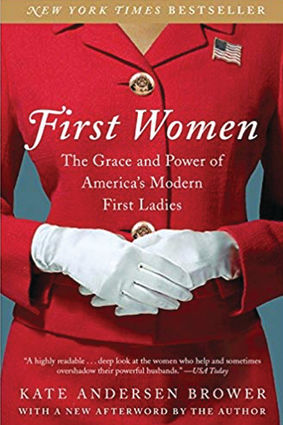 In her introduction, the author quotes from a letter written by a lady from Texas to First Lady Betty Ford, "Your are constitutionally required to be perfect." Lady Bird Johnson said a first lady needs to be a "showman and a salesman, a clotheshorse and a publicity sounding board, with a good heart, and a real interest in folks."

Filling a position not set forth in the Constitution (sorry lady from Texas), first ladies, from Martha Washington to Melania Trump, have defined their role for themselves. Some have remained in the background, some have become advocates for a cause and some have had major roles in policy. It is said that Edith Wilson made major decisions as her husband's stroke was hidden from the public. Eleanor Roosevelt was FDR's legs and eyes. Mamie Eisenhower said that her job was Ike.

Laura Bush was quoted as saying, "While it takes a nation to elect a president, we were elected by one man." Rosalyn Carter understood the covert power a first lady wields. As she put it, "I have learned that you can do anything you want to."

Published in early 2016, prior to the last Presidential election, Ms. Brower's book gives us a look at the 10 first ladies from Kennedy to Obama, five Republican and five Democrat administrations. Each has a very different outlook of their role, the restrictions of being the President's spouse, the platforms it gives them and, for some, raising a family in a fishbowl.

We see through letters how they related to that role and how they related to each other. While some have forged friendships, others have not. Nancy Reagan, for the most part, ignored Barbara Bush, when George H. W. Bush was vice president. A close friendship developed between Laura Bush and Michelle Obama.

Laura Bush had an advantage that most of the others did not. She was familiar with the running of the White House since she had spent a lot of time there when her inlaws were in residence. For some, like Rosalyn Carter, there was an element of culture shock. She had not been made aware that paying for all the food purchases for residents and staff is the personal responsibility of the president. Taxpayers only foot the bill for State dinners and such. When the Obama family moved in, Laura Bush and her daughters took Michelle and her daughters on a tour of the residence. The Bush girls made sure the Obama girls knew the fun and not so fun parts of living there.

What all these ladies have had in common is that they are both the protectors and supporters of their husbands. Each, in her own "iron fist in a velvet glove" way, have smoothed the path in the White House for their husband and family. Each have their own staff and sometimes tensions can run high between that staff and both the President's staff and the White House staff.

" First Women" gives insight into the day to day lives of first families, as well as giving us a picture of the contributions first ladies make in their own right.