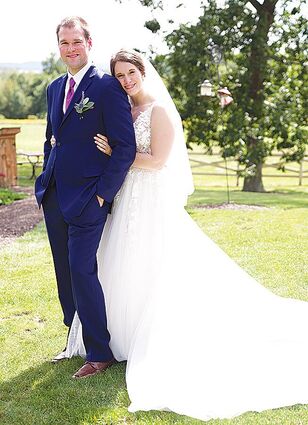 Marlee Clevenger and Travis Ritchey were joined in marriage on Sept. 25, 2021, at Woodbury Church of the Brethren.

Timothy Bartholomew, pastor and friend of the bride, officiated.

Marlee is the daughter of Mark and Shari Clevenger of Fishertown.

Travis is the son of Steven and Jeri Ritchey of Roaring Spring.

A reception at Morrisons Cove Memorial Park followed the ceremony.

"Faith is the most important thing to us," said Marlee. "We wanted our ceremony to be Christ-honoring. We wanted God to be on display."

The couple made their ceremony the focal point of the day. The service included a foot washing ceremony, lighting unity candles, and tying a cord of three strands. Marlee said that her pap read scripture and there was beautiful music.

Marlee and Travis wrote their own vows. Travis penned a poem.

"[The ceremony] was my favorite part of the day," said Marlee.

Their wedding day came a little over 5 months after Travis proposed.

"We knew we wanted to get married, so we did," said Marlee.

Travis popped the question on April 11, 2021, in Martinsburg. Travis' family owns mountain ground, where he and Marlee went on a hike. Travis put together a scavenger hunt, which ended with him asking Marlee to be his wife.

According to Marlee, most of the wedding planning happened within their first week of being engaged.

Marlee described wedding planning as "challenging," especially in the face of COVID.

"We wanted more people, but we wanted people to feel comfortable," said Marlee.

The pair offered a pie bar, which had individually wrapped pies made by Kristi Oberman. There were also sanitizing and food stations to reduce crowding.

Marlee and Travis started dating right as the pandemic started. The two were introduced through a friend who "thought they would be a good pair." They went on one date before lock down.

Marlee and Travis reside in Martinsburg. Marlee is an HR business partner at Central States Manufactoring Inc. Travis is a warehouse supervisor at Renaissance Nutrition.